For the first time in the history of the iOS operating system, Apple released the interface for short-range radio (NFC) for third-party applications in mid-September. This decision enables the use of an iOS App with NFC for industrial applications. The company ASPION GmbH, known for shock sensors for logistics and industrial applications, has directly used the release of the interface and now enables its customers to read out their shock sensors via NFC with Apple smartphones.

Previously, only smartphone users of Android operating systems could benefit from the convenient, location-independent readout of sensor data. "We are very pleased about Apple's decision to release the NFC interface for industrial applications", says ASPION managing director Michael Wöhr, "because it finally enables us to meet one of the most urgent customer requirements, namely the use of our sensors with the widespread iPhones".

ASPION is one of the first companies ever to provide an industrial application for iPhones with NFC technology. The company's app can be used to display and transmit the analysis of shock or temperature events. The premium functions already available for Android systems, such as data transfer to a cloud memory or display of location information, can now also be used in the iOS environment.

Currently, there is another limitation when using the app with iOS devices: Since Apple does not currently support writing information via the NFC interface, ASPION's shock sensors cannot yet be stopped via the app - which is easily possible with Android systems. "However, we are very confident that Apple will add this in the near future in order to further open up the use for industrial applications," says Michael Wöhr. The iPhone app is now available free of charge via the App Store and can be used with all ASPION sensors.

ASPION GmbH develops and markets energy-optimized, smart sensors with wireless communication for industrial 4.0 applications. The hardware and software solutions 'Made in Germany' support industrial companies in their logistical tasks: Processes and procedures can be intelligently networked, digitized and efficiently organized by ASPION's smart sensors. Sensor solutions are an essential building block in the digitization of industrial 4.0 applications, with which industrial and commercial enterprises save valuable time and costs. ASPION, based in Karlsruhe, Germany, was founded in 2011 by Managing Director Michael Wöhr. In addition to the award-winning standard product ASPION G-Log for transport monitoring, engineering services in the area of hardware-related development with solution integration round off the range of services.

With the opening of the NFC interface by Apple, ASPION shock sensors can now also be read out via iPhone App. 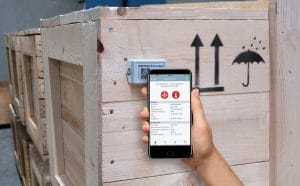 The use of the photographic material for editorial purposes is free of charge. Please print with reference to "ASPION GmbH".